There is talk in Austin that there may be a decision in the current school finance lawsuit as soon as mid-August. Whatever the decision is, it will be appealed to the Texas Supreme Court. Even if the appeal was made to the Supreme Court within 30 days of the decision by Judge John Dietz, oral arguments would likely not occur before spring of 2015. That puts the legislature in the position of budgeting for public schools for 2016-2017 without guidance from the courts.

The State Board Of Education (SBOE) met last week in Austin for four days. One item of particular interest is that the SBOE is required by law to develop a long-range plan for public education in Texas. The plan has not been updated in 14 years. SBOE members discussed utilizing the work of the Texas High Performance Schools Consortium and key stakeholders such as school board members, educators and parents. Ruben Cortez (D-Brownsville) and Marty Rowley (R-Amarillo) volunteered to collect information and begin the process. PTA was mentioned as a stakeholder that should be included. The SBOE’s next meeting will be held September 17-19, 2014 in Austin.

Report Urges more Funding for Job Training Programs
A new workforce report released Wednesday by the Texas comptroller’s office emphasizes the importance of investing in training and education to keep up with a rapidly changing employment landscape. 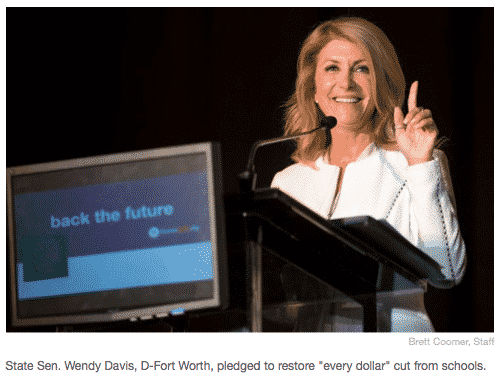 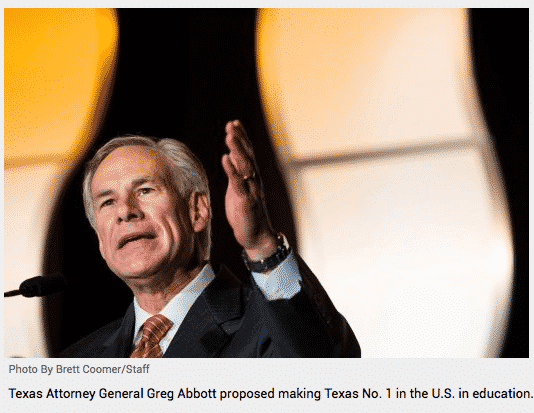 The gubernatorial candidates pitched their education proposals Saturday to the Texas Parent-Teacher Association, broadly agreeing in separate speeches that Texas has room to improve. Davis painted a bleaker portrait of the state’s education system than Abbott did, citing data that shows by 2020, more than 60 percent of jobs in Texas will require some type of education or training beyond high school, yet Texas has more adults without a high school diploma than any other state does.

Two top candidates for Texas governor talk education
Education is always a hot topic and not surprising it’s a big issue in the race for governor. Democrat Wendy Davis and Republican Greg Abbott were both in town Saturday, outlining their plans for the state’s underfunded schools. They both had a different approach. “I want to encourage you to keep it up,” said Davis.

OPINION:  Renaissance needed in state education model
In an information-driven society, nothing is more important to our long-term economic success than a well-educated, well-trained workforce. If Texas is to continue its astonishing economic growth, we need to set high expectations for our public schools, workforce training, colleges and universities – and make sure we meet them, consistently, for all Texans.

Committee to study ending the state lottery takes shape
The Texas Legislature’s discussions about eliminating the state lottery are moving forward. House Speaker Joe Straus on Thursday announced his appointments to the Legislative Committee to Review the Texas Lottery and Texas Lottery Commission, a new panel charged with studying the ramifications of ending the lottery, along with examining charitable bingo and how its revenue is distributed. The appointees include three Harris County lawmakers, one of whom is a vocal lottery critic.

State Board of Education OKs Paid Trips to Charter Schools
The state Board of Education has given approval for its members to take all-expenses-paid trips touring out-of-state charter school networks seeking approval to operate in Texas. The fact-finding missions will be funded by private foundations or individual donors — not taxpayers or the charter schools themselves. Friday’s vote was unanimous among the board’s 10 Republicans and five Democrats.

Does AP History Contain Common Core?
Since Common Core launched five years ago, Texas has refused to participate in the initiative to set uniform academic standards across U.S. public schools. A diverse alliance of conservative activists and typically left-leaning teachers’ groups have supported state officials in that decision, which they said was to guard against a potential federal takeover of education policy.

As Teacher Pay Lags, Attrition, Class Size Grow
Stacked up against other states, Texas public schools could win the best-bang-for-your-buck competition. The state spends less than most others, and its students perform better than many. But the commitment to fiscal restraint has come with its own burdens for teachers.