TEA Applies to Feds for Pre-K Grant; Commissioner Includes Voucher Model in Grant
TEA has submitted an application for a federal preschool expansion grant and is calling the proposal the Texas Prekindergarten Expansion Grant (PEG).  The grant will be jointly administered by the U.S. Department of Education and the U.S. Department of Health and Human Services. Grants will be awarded by mid-December 2014. The grant would provide $30 million per year for a four-year time period with the goal of expanding current pre-k systems. It is anticipated that seven to eight proposals will receive grant awards.

TEA has selected 15 high-need communities that would be eligible to participate in one or more of the four grant models. These communities are within the following counties: Brazoria, Brazos, Cameron, Collin, Dallas, EastPoint Promise Zone in Brazoria County, Ft. Bend, Harris, Hidalgo, Lubbock, Nacogdoches, Nueces, Tarrant, Travis, and Williamson. TEA has posted the various components of its grant application.

Senate Jurisprudence Discusses Truancy
The Senate Jurisprudence Committee met recently to discuss its interim charge to study and make recommendations regarding how truancy is handled by public schools and the courts. The lieutenant governor directed senators to consider decriminalizing truancy and the feasibility of adjudicating juvenile truancy as a civil offense.

Senators expressed concerns that students who skip school are ending up in court and pleading guilty or not guilty in court, which then establishes criminal records for some kids. Legislators are looking for solutions to address the issue and to the school community to provide recommendations.

Among the challenges that districts face when handling truancy and the possible solutions:

Senators are expected to make recommendations and file legislation next session regarding this topic.

Lawmakers take up school finance while waiting for court to rule
For the past several weeks, state lawmakers have been meeting to discuss how to better fund public education in the wake of a court ruling calling Texas’ school finance system inequitable, inefficient and illegal.

Charter Schools Borrow at Record Pace Led by Texas: Muni Credit
U.S. charter schools are issuing a record amount of municipal debt, with Texas leading the charge as borrowers rated close to junk tap a program that gives their bonds top credit grades. The institutions, privately run with public funding, have sold $1.6 billion of securities in 2014, data compiled by Bloomberg show. That’s more than all of last year and the most in Bloomberg data beginning in 2007. About $464 million has come from Texas, which for the first time in April backed a charter-school deal with its Permanent School Fund. The state-run pool guarantees bonds, lending the debt the AAA grade that Standard & Poor’s accords Texas. 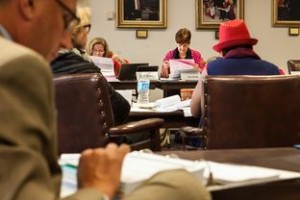 Two hours into a meeting called to parse revisions to new social studies textbooks for Texas schoolchildren — and a month before the deadline for final approval — the State Board of Education found itself confronting a tricky question. Was Sam Houston a liberal?

Special report: Texas standardized tests in trouble; districts not showing gains
For Texas school districts high-achieving and low, affluent and not, urban and suburban, the lack of progress on STAAR is consistent. Three years of stagnant statewide average test scores were matched by flat results in the districts where most Texas students attend, according to an analysis by The Dallas Morning News. It wasn’t supposed to be this way. 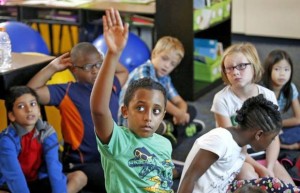 Secrets to success: How one school system raised its Texas standardized scores
When headlines in May bemoaned stagnant statewide scores on the STAAR tests, Jeannie Stone’s reaction was “Not in Wylie!” And the district’s assistant superintendent of curriculum and instruction was right. In fact, Wylie ISD’s progress on the State of Texas Assessment of Academic Readiness exams was unique. Even so, the gains were modest and illustrate the challenges facing districts concerned about tests.