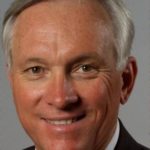 OGDEN WARNS OF PAINFUL BUDGET CUTS TO COME
Medicaid, education programs cannot be spared, the new Senate president pro tem and longtime Finance chairman tells colleagues.
Soon after taking the oath as president pro tempore of the Texas Senate, Bryan Republican Steve Ogden stripped away any sugarcoating on the looming $27 billion shortfall facing lawmakers as they opened the 82nd legislative session.
Be prepared to cut entitlement programs, especially Medicaid, Ogden said. Expect to do the same for higher education and even public education. And face the fact that the margins tax enacted to pay for the property tax cuts in the 2006 school finance overhaul is not going to raise the revenue needed to make up the difference, he added.
So get ready to delve back into school finance reform, Ogden threw in for good measure.
“It’s impossible to balance this budget without making cuts in Article II and Article III,” Odgen told a very somber Senate, referring to the sections of the budget that cover human services and education.
And he should know. He’ll likely be appointed to chair the Senate Finance Committee for the fourth consecutive session.
Two years ago, the state was also facing a daunting shortfall. But much of it was wiped away when the federal government showered the state in stimulus dollars.
Don’t expect that to happen this time, Ogden said. And what that means is that instead of the feds paying 70 percent of the Medicaid load, which last go-round was about $44 billion, Washington’s share this time will likely be closer to about 58 percent.
That means the state will be on the hook for another $4.5 billion, if current service levels are to be continued, Odgen said. He suggested establishing a managed care system for the entitlement program, which he said would save the state about $4 billion.
“Medicaid cries out for reform,” he said. “Our first job, Senators, is how (do we) save Medicaid.”