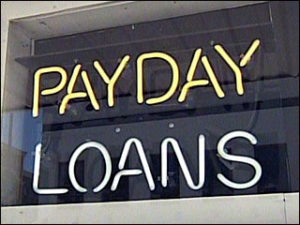 Compels two sides to get together in forced mediation.

It’s not often a committee chairman resorts to mediators to bring opposing sides of an issue together to negotiate, but then payday and car title lending is not your everyday issue.

On one side are regional and national corporations doing billions of dollars a year in virtually unregulated transactions. On the other are low- and middle-income consumers at the bottom of the financial food chain with no negotiating power. The industry reportedly has hired upwards of 30 lobbyists this session, some of them prominent; the would-be reformers, only two .

“I told them, ‘You need professional help,’” recounted Rep. Vicki Truitt (R-Keller). She said she took the extraordinary step of mediation because of the two sides’ mistrust of each other and the contentiousness of the issue. The chairman of House Pensions, Investments and Financial Services said it was their first face-to-face dialog ever.

Payday/car title loan brokers typically market short-term, high-interest loans to customers who can’t obtain credit elsewhere. Fees tacked on in the process often exceed the principal, all of which must be paid off in full to avoid rolling over the loan into a new one.

The last serious effort to address payday lending ended on a point of order in the House in 2005. Truitt recalls watching it and other efforts “blow up” on the floor and thinking, “I’m glad that’s not me carrying that bill.”

Although she agreed with critics that some bills filed this session would have eviscerated the industry and driven customers to worse alternatives, Truitt said some regulation was needed nevertheless. Bills now in both chambers would require reporting, disclosure and some level of state oversight. A more stringent version by Sen. Wendy Davis (R-Fort Worth) reportedly has been stuck on the Senate Intent Calendar while its language is being revisited and stakeholders are meeting.

Meanwhile, Truitt crafted a narrow set of bills that would attract “less enhancement” on the floor. To do so, she brought in the Center for Public Policy Dispute Resolution at the University of Texas Law School. Three members of each camp met with the mediators for some 30 hours over about 10 days in March to craft a compromise.

A representative of one of the reformers said that some of the key elements of their agenda, including loan rate and fee caps, were off the table from the outset due to the economy and the general Republican pro-business mindset. Truitt agreed saying she believes the market should self-adjust, adding that no single proposed cao would satisfy everyone.

For several years now the sub sub prime loan industry in Texas has enjoyed unfettered access to the high credit-risk, consumer loan market. Using what the reformers term a loophole in the law, lenders are operating as credit services organizations to arrange loans with lenders (other than banks and thrifts). The lenders’ fees are subject to constitutional interest rate limits and state usury laws, but the brokers’ fees are not because they are not considered interest. The lenders profit from the sheer volume while the brokers profit from recurring fees.

Reformers estimate the combined total annual loan volume in the sub subprime universe at approximately $5 billion ­­– $4 billion, payday; $1 billion, car title. Even ballpark figures for the number and average amount of loans are unavailable due to lack of reporting requirements. Their closest relative, installment loans, totaled 4.3 million loans averaging $545 each in 2009, according to Consumer Credit Commissioner Leslie Pettijohn. She said loan volume totaled $2.4 billion through 1,700 offices, which is less than half the number of their payday and car title loan cousins.

Advocates for reform contend that payday/car title loan storefronts have proliferated in excess of 3,500 in Texas largely because their parent corporations must pay only a $100 annual registration fee per company.

The newest combatants in the fray are self-help charities and religious organizations, namely the Texas Association of Goodwills, Texas Impact, and the Christian Life Commission of the Baptist General Convention of Texas.

They say they got involved because many among those they serve were overwhelmed with payday loan debt and sought churches’ help. Some Goodwill clients could not continue job training because their vehicles had been repossessed over unresolved car title loans. Some borrowers even called the Christian Life Commission offices directly, thinking they could help, according to their legislative counsel, Stephen Reeves.

He believes that he and his colleagues are gaining traction attacking abusive practices on moral grounds.

He and some of his colleagues see the unfairness inherent in industry practices as both pervasive and persuasive.   Despite being outnumbered by a lobby cadre he thinks may be larger than the pro-gambling forces. He also noted some unusual bi-partisan legislative Austin).

Michael Grimes, representing the loan-broker Consumer Service Alliance of Texas (CSAT), said he welcomes the input of the religious and social service groups, acknowledging that their presence has changed the political calculus somewhat.

“CSAT still hopes we can pass meaningful legislation and create a solid structure to continue operating in the state of Texas,” Grimes said.

Lori Henning, executive director of the Texas Association of Goodwills, believes change will come once people become dissatisfied with what’s happening to the poor, for whom she and others are advocating. She conceded, however, that changing the status quo after so many years is difficult.